The Toronto station is the terminus location of the Toronto branch line which is found south of Newcastle NSW at the 146.045km marker. The line opened in 1891 as a private business branch line constructed initially a local tram service. The branch line building was a major reason that the development of the town of Toronto went ahead and has also been able to attract many tourists over the years. The Fassifern to Toronto branch line was operational until 1990 when services ceased.

In the late 1800s near Newcastle a new area of land that was used for coal mining and settlement exploration. In 1885 the Excelsior Land Investment & Building Company was a land developer firm which purchased a former aboriginal mission land. This mission property land area covered the current day towns of Carey Bay, Coal Point, Kilaben Bay and Toronto. In 1887 the ELIBC began to sub-divide parts of the mission land and named it “Toronto Estate” as seen on advertising brochures from the era. This development essentially created the basis of present day Toronto. The company also in 1891 with some vision decided to build a tramway which took a route from Toronto and connected with the NSWGR main line railway station 4.4km away at Fassifern. The tramway first was operated by the Excelsior company from 1891 to 1899, then handed over to the Toronto Hotel & Tramway Co. until 1909. Another issue was that with the increase over time in passenger demand for the tramway’s services, it was having a problem at the Toronto end of the line, as the limited facilities that were built there were clearly becoming inadequate for such growing demand. The Toronto branch line in these early years was a major factor which saw the development of Toronto as a lakeside resort. This resort lifestyle made it easy for people to visit for many years to see regattas held on the lake, have picnics and enjoy short holidays. The railway also allowed over time for more and more people to live in Toronto and commute locally to nearby Newcastle for work.

After operating as a private line for 18 years, the Toronto line eventually fell into disrepair due to low returns and high costs and closed in 1909. At this stage the NSW Government stepped in and took over the running with trams until 1911. After further discussions with local groups and residents, the NSW Government decided to replace trams with its own rollingstock and expand operations on the branch in 1911. In order to have this happen the NSW Government Railways in 1910 begun rebuilding of  the entire 4km branch line so it could handle its heavier rollingstock and included such features as modifying the original grades so they were easier to traverse, new railway signals and implementing NSWGR operating standards. Along the line a few new bridges were built at Stoney Creek and at Mudd Creek. Small platforms were used at Fennells and Bowers.  Along with the upgrades already noted, the NSWGR built about 400m to south of Toronto station, next to the lake a new railway yard which incorporated an engine shed and a marshalling yard, which also had a loop siding along with 2 additional sidings. The goods shed was built in the yard to service the towns needs inwards and outwards goods needs. After the upgrade the 4km Toronto branch line section remained as a single line for the rest of its operational life. Full NSWGR railway services started on 28 May 1911 with scheduled train services from Newcastle running the full length. Initially steam hauled locomotives using 30 class tanks and then by the 1960s services used the 620 class diesel rail motors for services on the branch line. With the coming of the Main Northern Line with electrification between Wyong and Newcastle in 1984 unfortunately the electrification was not to be extended to the branch line covering Fassifern to Toronto. Instead the SRA decided to keep using the 620 series of diesel railcars to provide scheduled passenger services on the line. These railmotors met with the V sets and U boats at Fassifern and Newcastle as required.

The Toronto station building was constructed as part of an upgrade undertaken by the NSWGR to improve the lines overall infrastructure. The Toronto station construction started in 1910 and finished in early 1911. The design style was based on a typical station design of the 1900s era, which reflected in its overall shape and features which was suitable for the semi rural area. It combined both country and urban design features such as corrugated gabled roof, timber awning using riveted brackets and valances and the building’s walls were weatherboard style.

Click this google image for a better view of the Toronto railway yard as it once was in 1913.

Located inside the station were rooms for the station master’s office, a ticket office, and a waiting room. Each room had its own door with access to the platform. Two brick chimneys served fireplaces inside for the station master and waiting room. A small water tank was located on the northern side of the station. A separate weatherboard toilet block once stood next to the building. With the withdrawal of tram services and replacement by NSWGR carriages this meant that the passengers now entered their carriages stepping off the platform and not climbing up into the trams from the tracks which was a lot safer. With the building of the new station an overhead footbridge to access the foreshore was built to the south of the station to ensure people didn’t hurt themselves crossing the tracks in accessing the lake foreshore. A steam locomotive water tank was located near the southern end of the platform for replenishing he steam locomotive water supplies.

SERVICES
Horse drawn carriages were first to run along the branch line to Toronto in the 1890s and soon became slow. In order to move passengers quicker a variety of small and light type steam engines also ran along the line during its operation. After the introduction of NSWGR rollingstock, 30 class Tank and 32 class steam locomotive have been noted as operating on the branch line hauling mainly American style suburban type carriages. During the 1920s Toronto became a quite well known area to visit and this saw a surge in tourists from Sydney. These frequent visits saw in some cases as many as 20 picnic trains a day on the weekend running direct from Newcastle to Toronto.

Click on this google image of Fassifern station to see in more detail the Toronto branch line on the bottom side coming off the Main Northern Line.

In 1923 it was estimated that close to 100,000 visitors came to the town by train services. Passenger services operated over the line, generally as a shuttle service between Fassifern and Toronto but ocasional through services to Newcastle were operated. Many locals workers and students from the 1930s to the 1950s used the Toronto branch line as their transport to Newcastle.  Other services saw steam and diesel trains regularly running with movement of cattle after auctions at the Toronto sale yards. It was noted that in the 1960s about 1,100 people commuted daily on the trains to Newcastle. Starting in 1961 the 620 series diesel railmotors were used and at times were used alongside passenger trains hauled by 48 class diesel locomotives. 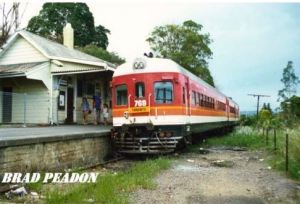 By the 1970s the increasing use and popularity of the motorcar caused patronage on the Toronto line to begin its terminal decline. By the late 1980s services even with falling patronage services were still being operated as frequently as every 20 minutes using the 620 series two-car diesel service. Some examples of services on the line can be seen in this film- http://www.youtube.com/watch?v=zkWuPvur8YU

Exactly 99yrs after the branch line was opened, sadly the Toronto line was forced to close down on 11 March 1990 due to low patronage on the services.

With the railway service now gone, like many railway stations across NSW which after being closed down, Toronto railway station too fell into decay from lack of funds. It was also heavily damaged by people who obviously had nothing better to do.

In 1992 the Toronto railway station was acquired by the Lake Macquarie and District Historical Society and they have since then reused it as their base for local historical purposes. The Society still in 2013 occupies the railway station and their level of care was noted in 2012 when they repainted the station building in new colours. This repaint added to the preservation of the building. Thanks to the ongoing reuse of the Toronto railway station, it is still able to retain its NSWGR historic status for many tourists to see up close and for locals to enjoy it as a meeting location. The LMDHS also maintains some of the surrounding grounds around the station building. The former station area still retains its original platform and the concrete stairway leading to nearby Brighton Road. The various black and white station signs are still present on the platform and building.

Unfortunately with the end of the steam locomotive era in the early 1970’s the marshalling yard and good shed located 400m south of the Toronto station were removed. The renovated area was turned into a new public park next to the Lake Macquarie. It is now known as Regatta Park, with a part of it having a boating club house / storage building. The immediate area south of the station platform was also totally landscaped in this timeframe and retains limited outline of the original railway perway. The only other noticeable remains surrounding the station are the Up Home signal and a mileage marker. A small corrugated shed which is noted to be the former lamp room is found on northern end of the platform decaying and unrestored. Nowadays with the station and yard nestled in the hillside cutting they are located between shops on one side and houses on the other but the station still remains essentially somewhat separated from the township thanks to the bush surrounding the station and yard. Additionally since the closure of the line, a walking/cycling track was built next to the remaining railway track north of the station heading towards Fassifern. Once outside the Toronto yard heading north the remains of the branch line are generally noted to be overgrown with substantial vegetation, but can still be seen.

As seen here the Toronto branch line has since 1990 become overgrown and could be reused with repairs.(Wikipedia courtesy via Athol Mullen image). It is interesting to note that the Toronto branch line is the only surviving branch line that is coming off the Main Northern Line, many others have since been long closed such as Adamstown to Belmont branch line which was totally removed and is now a walking track…. a foolish choice many have said locally, as one day rail may be needed that way again.

Currently with the LMDHS caring for the building and RailCorp (soon to be NSW Trains) owning the section of the branch line from Fassifern railway station to Cary Street, Toronto there is not expected to be any major changes for the foreseeable future unless massive development takes place at Toronto which will then require reuse of the branch line again one would assume…..

Photos below show how Toronto is in 2013 – preserved 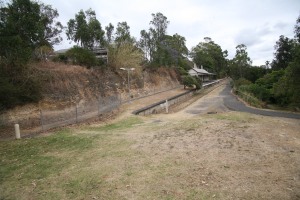 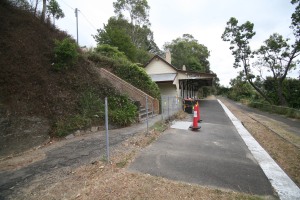 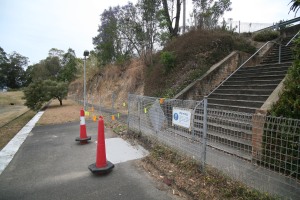 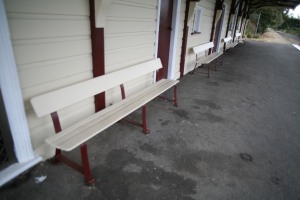 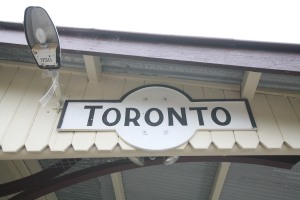 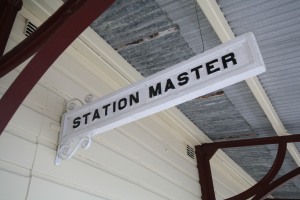 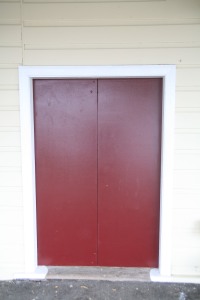 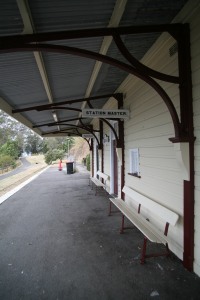 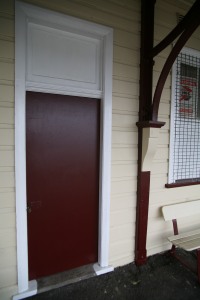 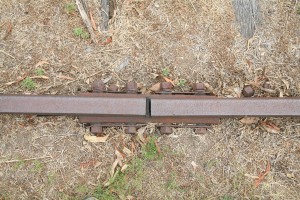 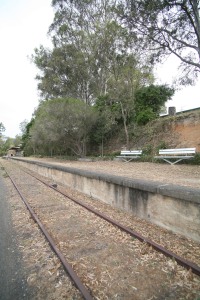 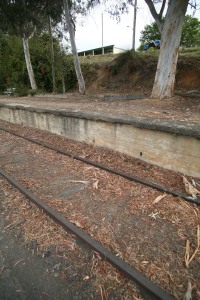 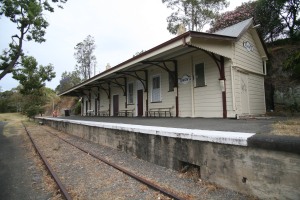 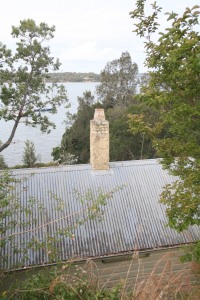 Located around the station in the yard are other relics such as a mileage posts, remnants of the railway track/perway heading north to Fassifern, signal posts and lamp room building. 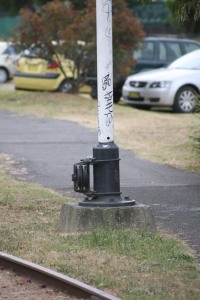 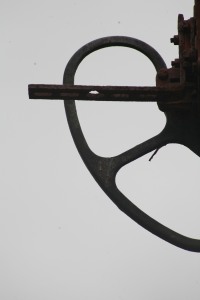 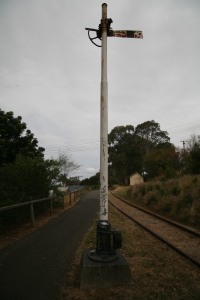 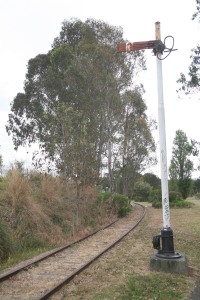 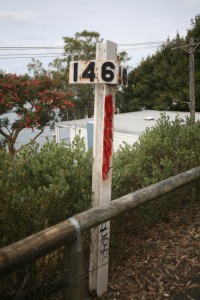 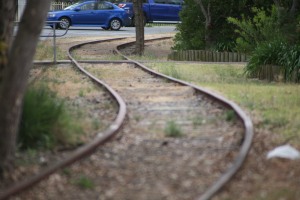 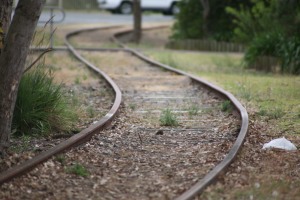